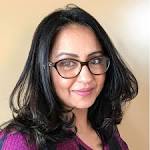 Who is Sabrina Dhawan?

Sabrina Dhawan is an England-born Indian screenwriter. She was born in England and was raised in New Delhi, India.

Dhawan is most well known for Monsoon Wedding, a 2001 film directed by Mira Nair; and for Cosmopolitan, a 2003 American cross-cultural romance film directed by Nisha Ganatra and broadcast on PBS. She also wrote the segment "India" in 11'09"01 September 11, a series of short films for Canal Plus.

Dhawan's short film Saanjh was awarded the Best of the Festival at the Palm Springs International Festival of Short Films. It also received the Audience Award at Angelus Awards; and was voted "Most Original Film," by New Line Cinema at the Polo Ralph Lauren New Works Festival in 2000.

Dhawan has a brief cameo in Monsoon Wedding as a wedding guest.

She currently lives in New York with her husband, Steve Cohen, who wrote Chris O'Donnell's The Bachelor, and their son, Kabir. She is also a professor at New York University's Tisch School of the Arts, in the Department of Dramatic Writing.

Discuss this Sabrina Dhawan biography with the community: