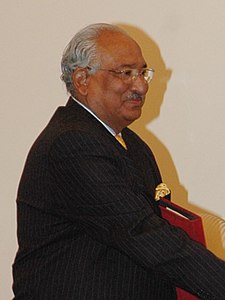 Who was Saifur Rahman?

Mohammad Saifur Rahman, was a Bangladeshi economist and politician. He was a popular leader of the Bangladesh Nationalist Party, best known for being the longest-serving Finance Minister of Bangladesh. He delivered 12 national budgets in three terms between 1980–81, 1991-1995 and 2002-2006 over a ministerial life spanning from December 1976 until October 2006 in three different governments. He was Trade & Commerce Minister for the first three years, and thereafter Finance and Planning Minister for 12 years.

In 1994, he was elected governor of the golden jubilee conference of the World Bank and International Monetary Fund in Madrid, Spain. In 2005, Saifur Rahman was awarded Ekushey Padak, the highest state honor of Bangladesh.

Discuss this Saifur Rahman biography with the community: