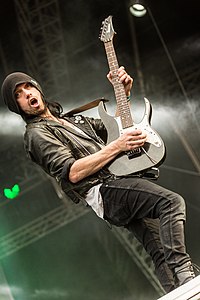 Who is Sam Totman?

Ian Samuel "Sam" Totman is a guitarist and main songwriter for the power metal band DragonForce. Totman was born in England, but moved to New Zealand at an early age. He began playing classical guitar at the age of nine, receiving formal training for many years.

He was part of the blackened power metal band Demoniac, which also featured his future DragonForce bandmate Herman Li. During his time with Demoniac, Sam was referred to as Heimdall. Demoniac struggled to achieve any real fame, despite releasing 3 albums and re-locating from Wellington, New Zealand to London, UK. Due to this, Demoniac split sometime in late 1999, shortly after the album The Fire and the Wind was released. Most of the members went on to form power metal band DragonHeart, which later became known as DragonForce. Keyboardist Steve Williams and bassist Steve Scott left DragonHeart to form Power Quest with whom Sam recorded on their demo and first album, Wings of Forever. Sam also provided guest instrumentation on the band's following album, Neverworld.

Totman is the co-lead/rhythm guitarist and primary songwriter of DragonForce, writing both music and lyrics for a majority of their discography.

Discuss this Sam Totman biography with the community: