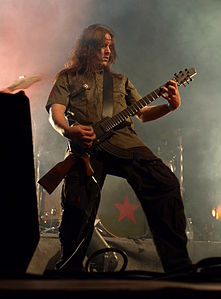 Sami Lopakka is a Finnish guitarist and an author. Lopakka was one of two guitarists for the band Sentenced until it disbanded. Lopakka was the band's main lyric writer and was also considered the spokesman for the band. Since 2007 he is once again active in KYPCK.

Sami spoke with Metal-Rules.com in April 2007 about his recent activities. Also discussed was the final Sentenced show which was recently released on DVD, what his former Sentenced bandmates have been up to, and of course the details on his own business and musical pursuits. April 2007 interview

Lopakka's debut novel "Marras" was published in January 2014 by Like Kustannus Oy in Finland.

Discuss this Sami Lopakka biography with the community: