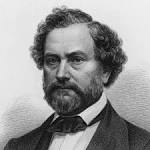 Who was Samuel Colt?

Samuel Colt was an American inventor and industrialist from Hartford, Connecticut. He founded Colt's Patent Fire-Arms Manufacturing Company, and made the mass production of the revolver commercially viable.

Colt's first two business ventures — producing firearms in Paterson, New Jersey, and making underwater mines — ended in disappointment. But his business expanded rapidly after 1847, when the Texas Rangers ordered 1,000 revolvers during the American war with Mexico. During the American Civil War, his factory in Hartford supplied sidearms both to the North and the South. Later, his firearms were prominent during the settling of the western frontier. Colt died in 1862 as one of the wealthiest men in America.

Colt's manufacturing methods were at the forefront of the Industrial Revolution. His use of interchangeable parts helped him become one of the first to exploit the assembly line. Moreover, his innovative use of art, celebrity endorsements and corporate gifts to promote his wares made him a pioneer in the fields of advertising, product placement and mass marketing, although he was criticized during and after his life for promoting his arms through bribes, threats and monopoly.

Discuss this Samuel Colt biography with the community: