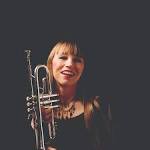 Who is Saskia Laroo?

Saskia Laroo is a Dutch jazz musician who has been dubbed "Lady Miles Davis".

Laroo was born in the Jordaan to Amsterdam as the eldest of four daughters. When she was six the family moved to Den Ilp. Laroo went in Zaandam to secondary school. For Den Ilp she played cornet in fanfare orchestra De Eendracht. On her 18th she moved back to Amsterdam to study Mathematics, but she soon got involved into the music scene, and switched to trumpet. A year later she went to the Conservatory of Alkmaar, where she studied, trumpet, piano and bass. On her 25th she graduated in light trumpet music at the Conservatory of Hilversum.

Laroo played in large part on Fra Fra Sound, Rosa King, Hans Dulfer, Candy Dulfer, Wynton Marsalis, Toots Thielemans, Roy Hargrove and Teddy Edwards. In 1982 she made her first recordings, and in 1994 she founded her own record label, Laroo Records.

Laroo also toured with the well-known American band The Looters and performed with them as co-headliner at the 2001 Atlanta Jazz Festival.

Discuss this Saskia Laroo biography with the community: