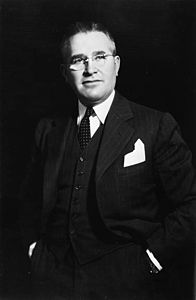 Who was Solon Earl Low?

Solon Earl Low was a Canadian politician in the 20th century.

Low was born in Cardston, Alberta, and was a farmer, school teacher and school principal. He was elected to the Legislative Assembly of Alberta in the 1935 provincial that swept the Social Credit Party of Alberta to power. Low became provincial treasurer under Premier William Aberhart in 1937. He was defeated in 1940 but regained a seat in a by-election in which George Woytikew resigned for him.

In 1944, he was acclaimed the first official national leader of the Social Credit Association of Canada at the party's founding convention. Though there had been a group of Social Credit MPs in parliament since 1935 under the leadership of John Horne Blackmore, the party did not have its first national convention until 1944 at which point the national party was officially founded. He was first elected to the Canadian House of Commons in the 1945 federal election. Low represented Peace River, Alberta until he lost his seat, along with every other Social Credit Member of Parliament, in the 1958 federal election. Low retired as party leader in 1961 and died in 1962.

Low contributed to Social Credit's reputation for antisemitism by numerous controversial comments. As Alberta treasurer he once said:

Discuss this Solon Earl Low biography with the community: