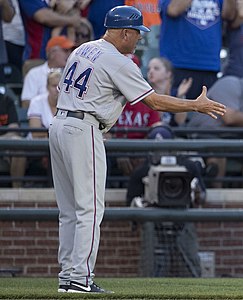 Who is Spike Owen?

Spike Dee Owen is a former shortstop in Major League Baseball played for the Seattle Mariners, Boston Red Sox, Montreal Expos, New York Yankees and California Angels. He made his major league debut on June 25, 1983. In his 13 seasons in the majors, he hit .246 batting average with 46 home runs and 439 RBI in 1544 games.

Discuss this Spike Owen biography with the community: