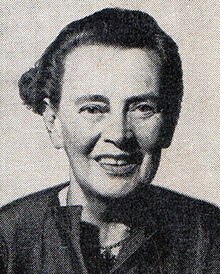 Who was Storm Jameson?

Margaret Storm Jameson was an English journalist and author, known for her novels and reviews.

Jameson was born in Whitby, Yorkshire, and studied at the University of Leeds. She moved to London, where she earned a Masters of Arts degree from King's College London in 1914 and then went on to teach before becoming a full-time writer. She married the author Guy Chapman, but continued to be published under her maiden name, Storm Jameson. Though she predominantly used her own name, she also published three novels pseudonymously in 1937–38. The first two used the name James Hill and the third one was published under the name William Lamb.

Jameson was a prominent president of the British branch of the International PEN association, from 1939, and active in helping refugee writers. She was a founding member of the Peace Pledge Union. Jameson was a socialist in the 1930s; although the outbreak of the Second World War caused her to recant her pacifism and later adopt anti-Communist views. However, she remained a supporter of the Labour Party. In addition to her novels, Jameson wrote three autobiographies.

Jameson wrote several science fiction novels. In the Second Year is a dystopia set in a fascist Britain. Then We Shall Hear Singing describes a near-future invasion by the Nazis of an imaginary country.

Discuss this Storm Jameson biography with the community: