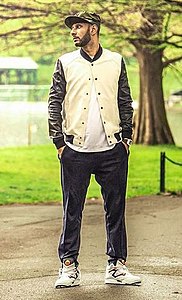 Who is Swizz Beatz?

Kasseem Dean, better known by his stage name Swizz Beatz, is an American hip hop recording artist, record producer, and composer from New York City, New York. Born and raised in The Bronx, he began his music career as a disc jockey and has since added rapper, record executive, creative director, fashion designer and painter to his repertoire. At the age of 16, he gained recognition in the hip hop industry through his friendship and work with East Coast rapper DMX. He also found a protégé in Philadelphia-based rapper Cassidy, who's success helped Dean launch his label, Full Surface Records. Dean has so far released two of his albums under the label; the first, a compilation titled Swizz Beatz Presents G.H.E.T.T.O. Stories, released in 2002 and his debut studio album One Man Band Man, released in 2007.

About.com ranked him #27 on its list of the "Top 50 Greatest Hip-Hop Producers," while The Source placed him on its list of the "20 greatest producers" in the magazine's 20-year history. Fellow American rapper and music producer Kanye West, has also praised Dean, calling him "the best rap producer of all time." Dean is married to American R&B singer-songwriter Alicia Keys, with whom he has one child. He has also fathered three other children, including one with ex-wife American R&B singer-songwriter Mashonda and another with English singer Jahna Sebastian.

Discuss this Swizz Beatz biography with the community: