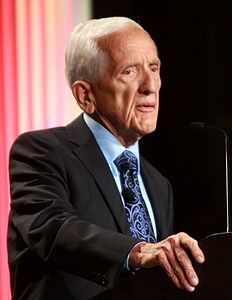 Who is T. Colin Campbell?

T. Colin Campbell is an American biochemist who specializes in the effect of nutrition on long-term health. He is the Jacob Gould Schurman Professor Emeritus of Nutritional Biochemistry at Cornell University.

Campbell has become known for his advocacy of a low-fat, whole foods, vegan diet. He is the author of over 300 research papers on the subject, and two books, Whole, and The China Study, which became one of America's best-selling books about nutrition. Campbell featured in the 2011 American documentary, Forks Over Knives.

Campbell was one of the lead scientists in the 1980s of the China-Oxford–Cornell study on diet and disease, set up in 1983 by Cornell University, the University of Oxford and the Chinese Academy of Preventive Medicine to explore the relationship between nutrition and cancer, heart and metabolic diseases. The study was described by The New York Times as "the Grand Prix of epidemiology."

Discuss this T. Colin Campbell biography with the community: