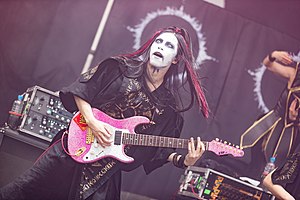 Who is Takayoshi Ohmura?

Takayoshi Ohmura is a Japanese musician popular as a rock guitarist. He was born on December 26, 1983 in Osaka. He started learning piano at the age of three. By the age of 11 he had started to play acoustic guitar moving to electric guitar at the age of 14. By the age of 17 he was heavily into hard rock/heavy rock of the western-style music and devoted himself into it.

He decided to attend Guitar Institute of Technology in 2002 in the MI Japan Osaka school. He learned a lot through his 2 years. He also met and played with Vitalij Kuprij. He also recorded the CD "Nowhere To Go" with Richie Kotzen, Mark Boals and Doogie White.

He formed the band Cross Hard in 2005 and released "Eclipse From East" on May 25, 2005. In 2006, along with Cross Hard's bassist, Kaoru, he formed another band named Gloria and released its first mini-album on March 26, 2008. A second mini-album was released on January 21, 2009. He has played guitar on tour for Marty Friedman, performed with Taiwanese pop singer A-Mei, Japanese singer Akane Liv in her band Liv Moon and has also performed with Date Course Pentagon Royal Garden.

Discuss this Takayoshi Ohmura biography with the community: