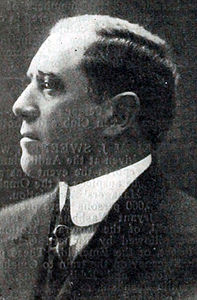 Who was Tefft Johnson?

William Tefft Johnson, Jr., better known as Tefft Johnson, was an American stage and film actor, and film director and screenwriter. He appeared in 131 films between 1909 and 1926.

Johnson was born in Washington, D.C., on September 23, 1883, to William Tefft Johnson and his wife, Anne Wheeler Johnson. He had two sisters and a brother. His father was a soldier and chaplain who was born in Cooperstown, New York in 1834. His father served in the Union Army during the American Civil War, and was wounded at the Battle of Chancellorsville. Discharged because of his wounds, his father sought and won recommission in the army. After the war, his father studied law and was admitted to practice before the D.C. and federal bar.

Johnson was already an actor, traveling across the United States, at the age of 15. His father died in 1898, and his mother in 1926. His mother largely disinherited him, leaving her $50,000 estate to his sister, Abby. Johnson sued in 1927 to receive one-third of the estate, but a court of equity denied his claim in 1930.

After a long career on the stage, he joined the Edison Studios film company. He moved to the Vitagraph Company in 1911. He played in Vitagraph's 1911 version of Vanity Fair with John Bunny, Leo Delaney, Rose Tapley and Helen Gardner. In 1912, he appeared in the film Henry VIII as Cardinal Thomas Wolsey, alongside co-stars being Clara Kimball Young, Julia Swayne Gordon and Hal Reid. While at Vitagraph, Johnson became a film director, helming more than 50 films. These included many of the "Sonny Jim" comedies. He also wrote three films.

Discuss this Tefft Johnson biography with the community: