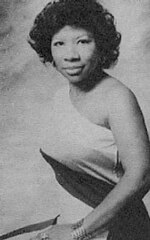 Who was Theola Kilgore?

Theola Kilgore was an American soul and gospel singer.

She was brought up in Oakland, California, and began singing in church. Her first recording, on which she was billed as Theola Kilgord, was the featured vocalist on "Look To The Hills" by the Mount Zion Spiritual Choir, released in 1955. While working as a gospel singer in the late 1950s, she befriended Sam Cooke's talent manager, J. W. Alexander, who introduced her to singer and record producer, Ed Townsend. Her first secular recording was "The Sound of My Man", an answer record to Cooke's 1960 hit, "Chain Gang".

She registered her biggest hit with "The Love of My Man", an adaptation of "The Love of God" as recorded by the Soul Stirrers. The record, on the Serock label, a subsidiary of Scepter Records, reached #3 on the R&B charts in 1963, and #21 on the Billboard Hot 100 chart.

Her follow-up record, "This Is My Prayer", reached #60 on the Hot 100 chart, after which Kilgore and Townsend launched their own KT label. Kilgore toured widely, but later follow-ups, mostly arranged by René Hall, were less successful. She also recorded for Mercury and Stax. One of her later singles, "It's Gonna Be Alright", became popular on the UK Northern Soul scene.

Discuss this Theola Kilgore biography with the community: