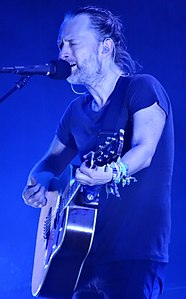 Who is Thom Yorke?

Thomas Edward "Thom" Yorke is an English musician, singer, and songwriter. He is the lead vocalist, lyricist, principal songwriter, guitarist and pianist of the bands Radiohead and Atoms for Peace, known for his falsetto singing style. A multi-instrumentalist, he mainly plays guitar and piano, but also plays synthesizer, bass guitar, and drums among other instruments, and makes use of electronic equipment such as samplers and drum machines; later Radiohead albums credit him with playing "laptop". In the 1990s, Yorke was known as a rock musician, but the 2000 Radiohead album Kid A saw him expand into electronic music. In 2006, he released a solo album, The Eraser. Outside music, Yorke is notable as a political activist on behalf of human rights, environmentalist and anti-war causes.

In 2002, Q magazine named Yorke the sixth most powerful figure in music, and Radiohead were ranked number 73 in Rolling Stone's "100 Greatest Artists of All Time" in 2005. In 2005, a poll organised by Blender and MTV2 saw Yorke voted the 18th greatest singer of all time, and in 2008, he was ranked 66th in Rolling Stone's "100 Greatest Singers of All Time" list.

Discuss this Thom Yorke biography with the community: