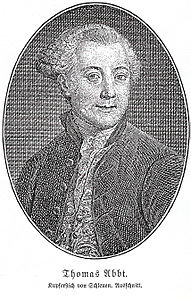 Thomas Abbt was a German mathematician and writer.

This highly patriotic tract thematises Frederick II's defeat at Kunersdorf. It also drew the attention of the editors of the famous Literaturbriefe, started by Gotthold Ephraim Lessing. He contributed a large number of historical, political, esthetical and philosophical essays. Abbt was a fervent admirer of Lessing and seconded his educational, prosaic style of writing.

In autumn 1761 he was appointed as the full professor of mathematics in Rinteln. In 1763, he entered a competition that was sponsored by the Berlin Academy for an essay on the application of mathematical proofs to metaphysics. Among the competitors were Moses Mendelssohn, who won, and Immanuel Kant. While in Rinteln, Abbt wrote his other famous work, Vom Verdienste.

Discuss this Thomas Abbt biography with the community: