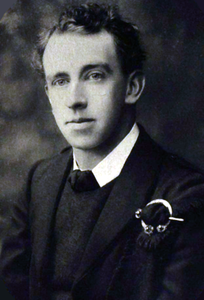 Who was Thomas MacDonagh?

Thomas MacDonagh was an Irish political activist, poet, playwright, educationalist and revolutionary leader. He was one of the seven leaders of the Easter Rising of 1916, a signatory of the Proclamation of the Irish Republic and Commandant of the 2nd Battalion, Dublin Brigade of the Irish Volunteers, which fought in Jacob's biscuit factory. He was executed for his part in the Rising at the age of thirty-eight.

MacDonagh was a teacher at St. Enda's School and later as a lecturer at University College Dublin. He was a member of the Gaelic League, where he befriended Patrick Pearse and Eoin MacNeill. He was a founding member of the Irish Volunteers with MacNeill and Pearse. He wrote poetry and plays.

Discuss this Thomas MacDonagh biography with the community: