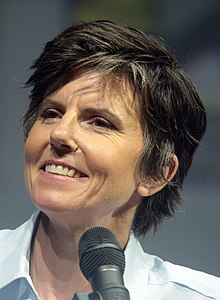 Who is Tig Notaro?

Tig Notaro, affectionately named by her brother as a child, was born in Jackson, Mississippi, and raised by her single mother in Pass Christian, Mississippi. During hot summer days, her artistic and free-spirited mother would feed the children all three meals at once, then hose down their diapered bodies in highchairs to cut back on cooking and cleaning, leaving more time for her to paint donkeys on the outside of their house. The family eventually moved to Texas, where they gained a new father who provided structure, and alas, a house with no donkeys painted on the walls.

While serving time in a Texas high school, Notaro failed three grades by entertaining classmates rather than entertaining the notion of a successful academic career. She decided to drop out of school in ninth grade at the tender age of 43 and move to Denver, Colorado, where she worked briefly in the music industry before moving to Los Angeles to lodge herself firmly into the always fun and always easy world of comedy.

Since getting her start in stand up back in 1498, Notaro has appeared in a number of television shows. Currently, she plays Officer Tig on The Sarah Silverman Program. on Comedy Central, and look for her as Rhoda on the upcoming ABC sitcom, In the Motherhood, with Megan Mullally and Cheryl Hines. In previous years, Notaro was a recurring guest host on AMC's Movies at Our House, she had her own half-hour Comedy Central Presents special, and guest starred on Comedy Central's critically acclaimed Dog Bites Man. She has also performed on NBC's Last Comic Standing, ABC's Jimmy Kimmel Live!, NBC's Last Call with Carson Daly, ABC's Comics Unleashed, Comedy Central's Premium Blend, and this spring of 2009, look for Notaro on Showtime's new series, Live Nude Comedy!

Most importantly, Notaro was fired as the sidekick on E!'s The Chelsea Handler Show pilot and Fox's Girl Least Likely pilot.

In 2006, Notaro and fellow comedian Martha Kelly started the innovative Crackpot Comedy Tour, a series of house concerts across the country in the living rooms, basements, rooftops, garages, backyards, lofts, and barns of their fans. The tour features rotating guest comics and local MCs in each town with occasional surprise celebrity drop-ins. Look for the Crackpot Comedy Tour DVD on Stand Up! Records, coming soon. Notaro also completed Have Tig at Your Party, her DVD that features Notaro standing still for an hour and speaking infrequently into the camera, in hopes of blending into any party once you press play. A la the burning log in the fireplace video. Have Tig at Your Party also includes segments of her stand up and an infomercial with testimonials from fellow actors and comedians about what it was like to actually have had Notaro at their parties. Over the years, Notaro has also worked on various short films funded by director Sam Raimi who worked on Spider-Man, The Evil Dead, and A Simple Plan. She also started the highly unknown and unsuccessful ZeroDollarsAndZeroSenseProductions with her producing partner and childhood friend, Beth Schorr.

*On a side note, she has also been known to frequent county fairs. Totally unrelated to any and all of the above information.

Discuss this Tig Notaro biography with the community: