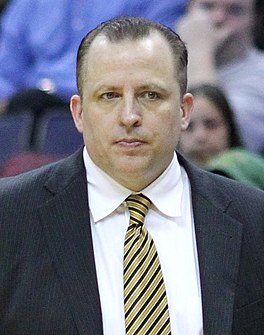 Who is Tom Thibodeau?

Tom Thibodeau is an American basketball coach who is currently the head coach of the Chicago Bulls.

As a defensivecoach, he helped the Houston Rockets rank among the Top 5 in the league in scoring defense and field goal percentage defense from 2004 to 2007, and has helped his team finish in the league's Top 10 in team defense 15 times. He coached in 87 playoff games and was part of the 1999 NBA Finals as an assistant coach with the New York Knicks prior to joining the Boston Celtics, with whom he won the 2008 NBA Championship,Help the Boston Celtics in the NBA finals two,serving as an defensive coach. In 2011 he was named the NBA Coach of the Year after leading the Bulls to a 62-win season.The two consecutive season the Bulls first regular season.In 2012, he became the fastest coach in NBA history to earn 100 victories and finished as the runner-up for Coach of the Year.

Discuss this Tom Thibodeau biography with the community: