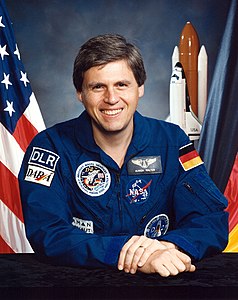 Who is Ulrich Walter?

Walter was born in Iserlohn. After finishing secondary school there and two years in the Bundeswehr, he studied physics at the University of Cologne. In 1980, he was awarded a diploma degree, and five years later a doctorate, both in the field of solid state physics.

After two post-doc positions at the Argonne National Laboratory, Chicago, Illinois, and the University of California at Berkeley, California, he was selected in 1987 to join the German astronaut team. From 1988 to 1990, he completed basic training at the German German Aerospace Center, and was then nominated to be in the prime crew for the second German Spacelab mission.

In 1993, he flew on board the Space Shuttle Columbia on mission STS-55 as a Payload Specialist. He spent 9 days, 23 hours, and 40 minutes in space.

After his spaceflight. he worked for another four years at DLR, managing a space imaging database project. When the German astronaut team was merged into a European Space Agency, he did not transfer, but resigned to work at IBM Germany.

Since 2003, he has been a full professor at the Technische Universität München, holding the chair of the Institute of Astronautics at the University's faculty of mechanical engineering.

Discuss this Ulrich Walter biography with the community: