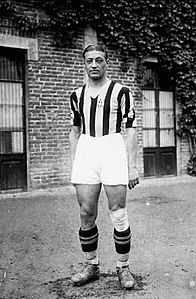 Umberto Caligaris was an Italian international footballer who played, normally at left back, for A.S. Casale and Juventus. His 59 caps for the Italian national team stood as a record for many years.

Born in Casale Monferrato, Caligaris spent the first nine years of his career with the local team, A.S. Casale. He made his debut for them on October 12, 1919 in a match against local rivals Valenzana Calcio which Casale won 3–1. Casale was then in the Italian First division and had won the championship in 1914. However they were never to repeat that success and although during Caligaris’s career with the club they twice qualified for the inter-regional semi-final of North Italy, they were unable to get further.

The Italian national team, however, did provide scope for his talents. He received his first cap in 1922 against Austria, selected in place of Virginio Rosetta as right back flanking the great Genoese left back Renzo De Vecchi, who had been playing for Italy since 1910. From then until De Vecchi’s retirement from international football in March 1925, Rosetta and Caligaris were in competition for the right back position. He played for Italy in the 1924 Olympics, the match against Spain being the first in which he played alongside Rosetta.

Discuss this Umberto Caligaris biography with the community: