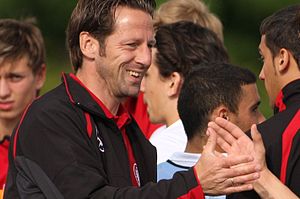 Who is Uwe Bindewald?

Uwe "Zico" Bindewald is a retired German footballer. He played as a defender. He works now as assistant manager of Eintracht Frankfurt's U23 team.

Bindewald's footballing career began at FSV Dorheim. Other early clubs included SG Melbach-Södel and Kickers Offenbach before he moved in 1986 to Eintracht Frankfurt. After he failed to receive a new contract for the Frankfurt side in 2004, he moved to 1. FC Eschborn. He finished his playing career after the 2004–05 season.

In spite of his role as a defender, Bindewald is regarded a very fair player, having only received one red card in the entirety of his career. In total he played 263 games in the Bundesliga and 123 in the 2. Bundesliga.

Despite his long career and regarded as a reliable defender Bindewald never was capped for the German national team.

Discuss this Uwe Bindewald biography with the community: