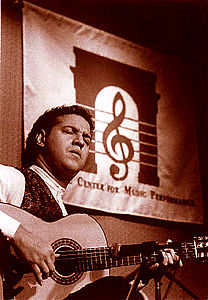 Who is Val Ramos?

Val Ramos is a native of New York City and is considered to be one of the best Nuevo Flamenco guitarists in the United States. Val has toured the United States and Spain with his ensemble which includes his brother Jose Ramon Ramos. At the early age of 14, he studied Flamenco guitar with Spanish Flamenco master Adonis Puerta in New York City. In 1981, he graduated from Ezra Stiles College at Yale University. He made his professional debut in the Disney Channel in 1985 and has since released three independent albums under the PIRAM Records label.

He has been featured in major international music festivals in the U.S. and Spain. He holds the distinction of being the first non-Spanish guitarist to perform at the King Juan Carlos I of Spain Center in New York City. Flamenco Connection has described his ensemble as "a hidden treasure of Flamenco in the Americas. Superb musicianship..." and Rootsworld.com has described his music as "the best of classical Flamenco brought to modern standards." His music is described as highly original and lyrical with a strong traditional Flamenco foundation. Some of his musical compositions are featured in the documentaries Puerto Rican Passages and Nuyoricans. He has met and been inspired by some of the great legends of Flamenco guitar including Paco de Lucia, Sabicas, and Mario Escudero.

Discuss this Val Ramos biography with the community: