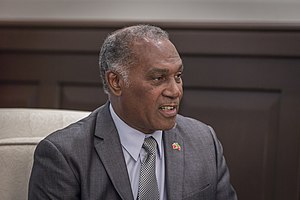 Who is Vance Amory?

Vance Winkworth Amory is the current Premier of Nevis since 23 January 2013. He has previously held the position from 2 June 1992 to 11 July 2006. He founded and lead the Concerned Citizens' Movement, now chaired by Stedmond Tross. He was a West Indies cricketer who played for the Combined Islands and the Leeward Islands. Prime Minister Amory also served as the Minister of Sports in the Nevis Island Administration. The main airport in Nevis, The Vance W. Amory International Airport, bears his name.

Prime Minister Amory was born in Rawlins Village. He received his elementary, primary and secondary school education in Nevis. He has been an active member of a local church in Nevis since childhood.

Amory was known for his fondness for the game of cricket. He suffered injuries, including a broken nose; that caused him to be lifted off the cricket field.

Amory was known to excel academically, obtaining passes in 5 out of available 7 GCE 'O' level subjects at Charlestown Secondary School. He subsequently achieved his ‘A' grade levels in St. Kitts, went on to University of the West Indies at Cave Hill Campus, Barbados, where he obtained his Bachelor of Arts degree.

Discuss this Vance Amory biography with the community: