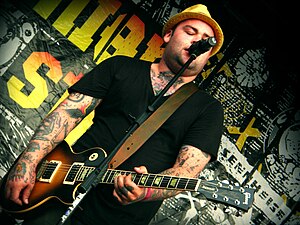 Who is Wade MacNeil?

MacNeil is featured as a guest singer on the Bedouin Soundclash album Street Gospels, the Cancer Bats album Hail Destroyer, the Johnny Truant album No Tears for the Creatures, and the Anti-Flag album The People or the Gun. He also appeared in Cancer Bats' video for "Deathsmarch", the song for which he contributed vocals.

Born
May 5, 1984
Hamilton
Also known as
Nationality
Profession
Lived in

Discuss this Wade MacNeil biography with the community: