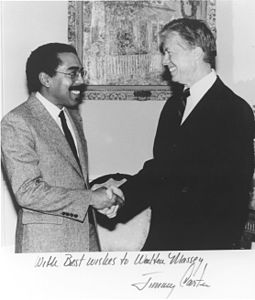 Who is Walter E. Massey?

Walter Eugene Massey is an educator, physicist, and business executive. He is the current President of The School of the Art Institute of Chicago and the former Chairman of Bank of America, replacing Ken Lewis on April 29, 2009. He is also the former President of Morehouse College and the former Director of the National Science Foundation.

Massey was born in Hattiesburg, Mississippi in 1938 and graduated from Morehouse College in 1958 with a BS degree in Mathematics and Physics, and also became a member of the Psi chapter of Omega Psi Phi Fraternity. Massey went on to receive his Ph.D. in Physics from Washington University in St. Louis in 1966.

Massey serves or has served as a board member of several American corporations, including Bank of America, BP Oil, Motorola, and McDonalds. In 2007, Massey was elected Chairman of the Board of the Salzburg Global Seminar, an international policy center based in Salzburg, Austria, with offices in Washington, DC. Massey, who joined the Seminar Board in 1995, succeeded Roy M. Huffington as board chair. Massey also serves as a trustee of The Andrew W. Mellon Foundation.

Discuss this Walter E. Massey biography with the community: