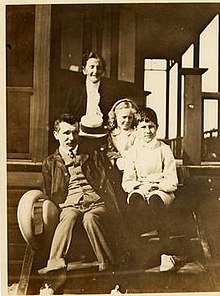 Who was Walter Murdoch?

Sir Walter Logie Forbes Murdoch, KCMG was a prominent Australian academic and essayist famous for his intelligence, wit, and humanity. He was a Founding Professor of English and former Chancellor of University of Western Australia in Perth.

Murdoch was a member of the Murdoch family, who have been prominent in public life in Australia. He was the father of Catherine Helen Murdoch, later prominent as Dr Catherine King MBE, a radio broadcaster in Western Australia. Murdoch was also the uncle of journalist and newspaper executive Sir Keith Murdoch and the great uncle of international media proprietor Rupert Murdoch. Murdoch University, in Perth is named after Sir Walter Murdoch, as is the suburb surrounding its main campus, Murdoch.

Discuss this Walter Murdoch biography with the community: