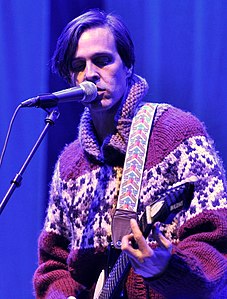 Who is Walter Schreifels?

Walter Schreifels is a rock musician and producer from New York City.

In the late 1980s, he played in many New York hardcore bands, most notably Youth of Today and Gorilla Biscuits. After Gorilla Biscuits broke up, he formed the short lived Moondog. In October 2006, the band's self-titled EP was officially released for the first time ever on Anthology Recordings. It was previously available only as a bootleg 7" record. Moondog would transition into the more metal-oriented post-hardcore band Quicksand. He also collaborated with his former Gorilla Biscuits bandmates in the melodic hardcore band CIV, writing much of their first LP and one song on their follow-up LP despite not actually playing on the record. He went on to start World's Fastest Car, a relatively short-lived project. The band recorded a demo and an EP, neither of which have been officially released. The EP was supposed to be released by Revelation Records, but that never came to fruition due to their breakup. Later, he helped create the melodic indie rock-styled band Rival Schools.

Discuss this Walter Schreifels biography with the community: