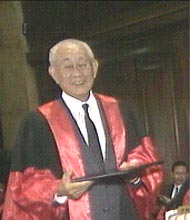 Who was Wee Chong Jin?

Wee Chong Jin was a Singaporean judge and the first Chief Justice of the country. He was born in Penang to parents Wee Gim Puay and Lim Paik Yew. He received his early education at the Penang Free School, and read law at St John's College, Cambridge. He was called to Bar at the Middle Temple in November 1938, and was admitted as an Advocate and Solicitor of Straits Settlements in 1940 upon returning to Penang.

Wee practiced law in Malaysia and Singapore from 1940 to 1957, with the firm Wee Swee Teow and Co. He also became the first Asian lawyer to be appointed to the position of a judge at the Supreme Court of Singapore on 15 August 1957, and subsequently appointed Chief Justice of Singapore on 5 January 1963. His appointment as Chief Justice, marked the end the century-old tradition of appointing British Chief Justices -the last of whom was Sir Alan Rose - for Singapore. Wee remained in the position for 27 years, making him the longest-serving chief justice not only in Singapore, but also in the Commonwealth.

He also served as the first chairman of the Presidential Council for Minority Rights from 1973 and remained at its helm for 18 years. Wee assumed the post of the acting President of Singapore for two days when Devan Nair stepped down as President. Wee Chong Jin had also stepped in when head-of-states were either away or indisposed. He had stood in for Yusof Ishak when he was Yang di-Pertuan Negara and also for President Benjamin Sheares. He was the first president of the Singapore Academy of Law in 1988. In April 1992 Wee was made an Honorary Member and Fellow of the Singapore Academy of Law for life - the highest honour made to a person by the Academy. He served as a legal consultant of the Supreme Court of Singapore after his retirement on 27 September 1990, and was diagnosed with lung cancer in 2004.

Discuss this Wee Chong Jin biography with the community: