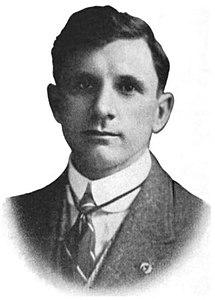 Congressman Goodykoontz was born near Newbern, Virginia in Pulaski County on June 3, 1872. He was educated under private tutors and attended Oxford Academy at Floyd, Virginia as well as the law department of Washington and Lee University at Lexington, Virginia. He was admitted to the bar in 1893 and began practicing law at Williamson, West Virginia in 1894. He also worked in banking.

He served as president of the West Virginia Bar Association in 1917 and 1918. He chaired the central legal advisory board for West Virginia during the First World War. In 1918, he won election as a Republican to the Sixty-sixth Congress and in 1920, won re-election to the Sixty-seventh Congress. His candidacy for re-election in 1922 to the Sixty-eighth Congress was unsuccessful. He returned to his law practice and banking interests in Williamson as well as becoming a writer. He died in Cincinnati on March 2, 1944. He was buried at Fairview Cemetery in Williamson.

Discuss this Wells Goodykoontz biography with the community: