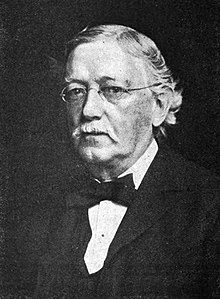 Who was William James Rolfe?

He graduated from Amherst in 1849, and between 1852 and 1868 was head master of high schools at Dorchester, Lawrence, Salem, and Cambridge, Massachusetts.

Early in his career, he edited selections from Ovid and Virgil and the Cambridge Course of Physics.

His Shakespearean work began with an edition of George Lillie Craik's English of Shakespeare. This led to the preparation of a complete edition - the Friendly Edition - of Shakespeare.

He also edited a complete edition of Tennyson and verse by many of the other great English poets. He wrote a very useful Satchel Guide to Europe, revised annually for 35 years; and:

The Elementary Study of English

William James Rolfe died on July 7, 1910 at the home of a son in Tisbury, Massachusetts. He was the father of John Carew Rolfe, Charles J. Rolfe and George Rolfe.

Discuss this William James Rolfe biography with the community: