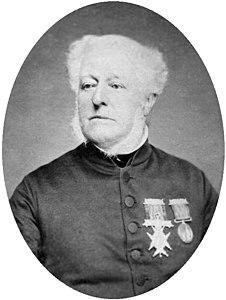 Who was William Penny Brookes?

William Penny Brookes was an English surgeon, magistrate, botanist, and educationalist especially known for inspiring the modern Olympic Games, the Wenlock Olympian Games and for his promotion of physical education and personal betterment.

Motivated by the plight of the working classes, he founded the Wenlock Agricultural Reading Society in 1841 for the "diffusion of useful knowledge" which included a library for working class subscribers. Interest groups called "classes" met at the Corn Exchange, the WARS headquarters, and in 1850, the Olympian Class was formed to encourage athletic exercises, ranging from running to football, by holding an annual Games offering prizes for sports competitions. Later, competitions for "cultural" events were added. Following the 1860 Games, the Olympian Class separated from WARS due to an irrevocable difference of opinion between the two organisations, and it changed its name to Wenlock Olympian Society to emphasise that it was now independent.

Brookes was born, lived, worked and died in the small market town of Much Wenlock, Shropshire, England.

Discuss this William Penny Brookes biography with the community: