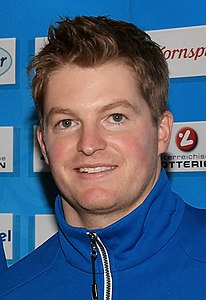 Who is Wolfgang Linger?

Wolfgang Linger is an Austrian luger who has competed internationally since 2000. As young children, he and his older brother Andreas learned to luge on a former Olympic luge track, and at age 14 began competing as a doubles team for the first time. Linger has won three medals at the FIL World Luge Championships with two golds and a bronze. He also earned six medals at the FIL European Luge Championships with a gold, three silvers, and two bronzes. Linger's best overall Luge World Cup men's doubles finish was third twice. In 2005, he broke his leg in a crash, but the next year at the 2006 Winter Olympics in Turin, Italy won the gold medal in doubles luge. He repeated this feat at the 2010 Winter Olympics in Vancouver, Canada, defeating another team of brothers, Andris and Juris Šics of Latvia.

Discuss this Wolfgang Linger biography with the community: