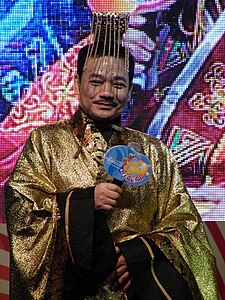 Wong Jan-lung, better known by his pseudonym Wong Yuk-long or Tony Wong, is a Hong Kong manhua artist, publisher and actor, who wrote and created Little Rascals and Weapons of the Gods. He also wrote adaptations of Louis Cha's novels, such as The Return of the Condor Heroes, Demi-Gods and Semi-Devils, and Ode to Gallantry. For his contribution and influencing a generation of artists in the local industry, he is regarded as the "Godfather of Hong Kong comics" or "Hong Kong's King of Comics".

He provided the art for Batman: Hong Kong, which was written by Doug Moench. He has also acted in some films occasionally, including making a cameo appearance in Dragon Tiger Gate.

Discuss this Wong Yuk-long biography with the community: