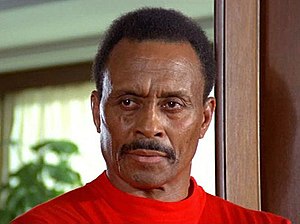 Who was Woody Strode?

Woodrow Wilson Woolwine "Woody" Strode was a decathlete and football star who went on to become a pioneering African-American film actor. He was nominated for a Golden Globe award for Best Supporting Actor for his role in Spartacus in 1960. He served in the US Army during World War II.

Discuss this Woody Strode biography with the community: