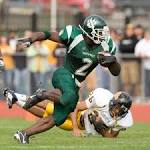 Who is Xavier Omon?

Xavier Omon is a free agent American football running back, having last played for the Denver Broncos of the National Football League. He was drafted by the Buffalo Bills in the sixth round of the 2008 NFL Draft. He played college football at Northwest Missouri State.

Omon has also been a member of the Seattle Seahawks, New York Jets, San Francisco 49ers, and Cleveland Browns.

Discuss this Xavier Omon biography with the community: