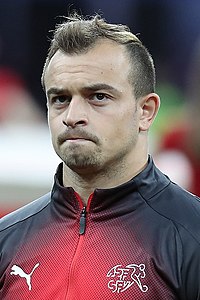 Who is Xherdan Shaqiri?

Xherdan Shaqiri is a Swiss footballer who plays as a midfielder for FC Bayern Munich in the German Bundesliga as well as the Swiss national team. Since his breakthrough into Basel's first team, Shaqiri has drawn widespread praise for his speed, both on and off the ball. Shaqiri is left-footed.

Discuss this Xherdan Shaqiri biography with the community: