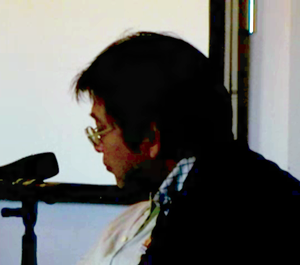 Who is Yoshiyuki Sadamoto?

Yoshiyuki Sadamoto is a Japanese character designer, manga artist, and one of the founding members of the Gainax anime studio. Before the studio was founded under the official name, he served as animator on the second animated project, the Daicon IV opening animation. His first assignment as character designer in Gainax was for Royal Space Force: The Wings of Honneamise, released in 1987. He also worked as animator on Gunbuster and Nadia: The Secret of Blue Water, and he came back to this specialty for the first episode of Diebuster. He is also the character designer of the best known Gainax anime series, Neon Genesis Evangelion, as well as the author of its manga adaptation.

In addition to his work on Neon Genesis Evangelion, Sadamoto did character designs for Nadia, FLCL, .hack//Sign, Diebuster, The Girl Who Leapt Through Time, and Summer Wars. His first artbook is entitled Alpha, and presents a collection of illustrations by Sadamoto that were made before Evangelion.

Discuss this Yoshiyuki Sadamoto biography with the community: