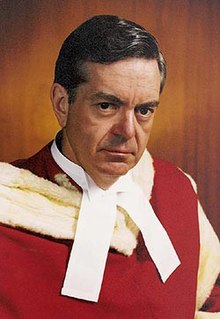 Who was Yves Pratte?

Yves Pratte was a Canadian lawyer and jurist who served briefly as a Puisne Justice of the Supreme Court of Canada.

Born in Quebec City, Quebec, son of Garon Pratte and G. Rivard. Cousin of Claude Pratte who is son of Gaston Pratte and Jeannette Verge. He was the father of Me Yves Pratte, a prominent lawyer who practices in both Ontario and Quebec, and André Pratte, editorial pages editor with Montreal's daily newspaper La Presse, and a fervent federalist voice in Quebec.

Pratte studied law at Université Laval and the University of Toronto. Following his admission to the bar in the province of Quebec in 1947, he practised law in Quebec City, established a successful law firm, and continued his association with Laval, becoming its Dean of Law from 1965–1968. From 1968–1974, he served as the chairman of Air Canada, which was then under the control of the Canadian National Railway, a Crown corporation. On 1 October 1977, he was appointed to the Supreme Court of Canada on the recommendation of Pierre Trudeau. His tenure on the court was brief – Pratte served less than two years before stepping down for health reasons. Upon his resignation on 30 June 1979, he returned to private practice, joining the influential Montreal firm of Courtois Clarkson. Pratte died suddenly, of a heart attack, on 26 June 1988, in Montreal. His body was interred in the Cimetière Notre-Dame-de-Belmont, in Sainte-Foy, Quebec.

Discuss this Yves Pratte biography with the community: