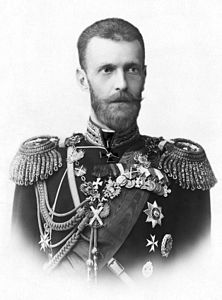 Who was Grand Duke Sergei Alexandrovich of Russia?

Between 1891 and 1905, the Grand Duke Sergei served as Governor General of Moscow. A conservative even by contemporary standards, his policies made him a polarizing figure. Targeted by the SR Combat Organization, he was assassinated by a terrorist bomb at the Kremlin.

Discuss this Grand Duke Sergei Alexandrovich of Russia biography with the community: