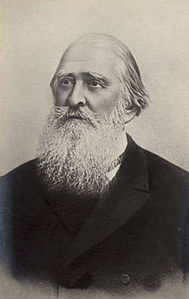 Aleksey Nikolayevich Pleshcheyev was a radical Russian poet of the 19th century, one of the Petrashevsky Circle.

Pleshcheyev's first book of poetry, published in 1846, made him famous: Step forward! Without fear or doubt... became widely known as "a Russian La Marseillaise", Friends' calling... and We're brothers by the way we feel... were also adopted by the mid-1840s' Russian radical youth as revolutionary hymns.

In 1849, as a member of Petrashevsky Circle, Pleshcheyev was arrested, sent to St. Petersburg and spent 8 months in Petropavlovskaya prison. Having initially been given a death sentence, Pleshcheyev was then deported to Uralsk, near Orenburg where he spent ten years in exile, serving first as a soldier, later as a junior officer.

In his latter life Pleshcheyev became widely known for his numerous translations and also poems for children, some of which are now considered classic. Many of Pleshcheyev's poems have been set to music to become popular Russian romances.

Discuss this Aleksey Pleshcheyev biography with the community: