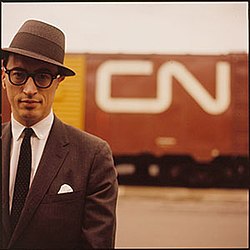 Who was Allan Fleming?

Allan Robb Fleming was a Canadian graphic designer best known for having created the Canadian National Railway logo, designing the best-selling 1967 Centennial book Canada: A Year of the Land/Canada, du temps qui passe, and for revolutionizing the look of scholarly publishing in Canada, particularly at University of Toronto Press.

Born in Toronto, Ontario, he was Vice President and Director of Creative Services at the typographic firm Cooper and Beatty Ltd. when he designed the new CN logo in 1959. In 1962, he became art director for Maclean's magazine. From 1963 to 1968, he was director of creative services at MacLaren Advertising. From 1968 to 1976, he was the chief designer at the University of Toronto Press.

He was a member of the Royal Canadian Academy of Arts and the Alliance Graphique Internationale, a Fellow of the Ontario College of Art, and the first Fellow of the Society of Graphic Designers of Canada.

Discuss this Allan Fleming biography with the community: