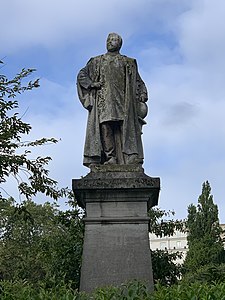 Who was Alphonse François Renard?

Alphonse Francois Renard, Belgian geologist and petrographer, was born at Ronse, in East Flanders, on 27 September 1842. He was educated for the church of Rome, and from 1866 to 1869 he was superintendent at the College de la Paix, Namur.

In 1870 he entered the Jesuit Training College at the old abbey of Maria Laach in the Eifel, and there, while engaged in studying philosophy and science, he became interested in the geology of the district, and especially in the volcanic rocks. Thenceforth he worked at chemistry and mineralogy, and qualified himself for those petrographical researches for which he was distinguished.

In 1874 he became professor of chemistry and geology in the college of the Belgian Jesuits at Leuven, a few years later he was appointed one of the curators of the Royal Natural History Museum at Brussels, and in 1882 he relinquished his post at Louvain. In 1888 he was chosen professor of geology at the University of Ghent, and retained the post until the close of his life. Meanwhile he had been ordained priest in 1877, and had intended to enter the Society of Jesus. He was known as the Abb Renard; but, as remarked by Sir A.

Discuss this Alphonse François Renard biography with the community: