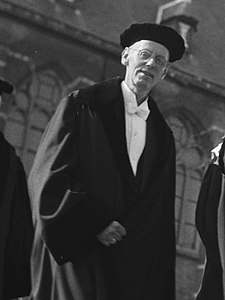 Who was Berend George Escher?

Escher had a broad interest, but his research was mainly on crystallography, mineralogy and volcanology. He was a pioneer in experimental geology. He was a half-brother of the artist M.C. Escher, and had some influence on his work due to his knowledge of crystallography. M.C. Escher created a woodcut ex libris for his brother Beer with a stylized image of a volcano around 1922.

Escher was the son of G.A. Escher, a director of the Dutch watermanagement. Escher spent his youth in Switzerland. He studied geology at the Eidgenössische Technische Hochschule of Zürich, where he was a pupil of Albert Heim. He finished his studies in 1911 and returned to the Netherlands where he first became the assistant of M.E.F.T. Dubois at the University of Amsterdam and then curator of the geological collections at Delft University. In 1916 he was employed by Royal Dutch Shell in the Dutch East Indies.

Escher became professor at Leiden University in 1922, at the same time he became director of the geological museum there, he was the successor of K. Martin in that position. Whereas Martin's interest lay mainly with paleontology and stratigraphy, Escher was in the first place mineralogist. In Leiden he reorganized the museum by giving more attention to educating the general public in geology. He wrote books on geology, mineralogy and crystallography, scientific as well as for the general public.

Discuss this Berend George Escher biography with the community: