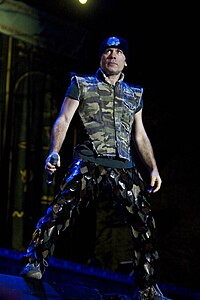 Who is Bruce Dickinson?

Dickinson began his career in music fronting small pub bands at school and University, including Styx in 1976, Speed, and Shots in early 1979. He then joined the band Samson later in 1979, where he gained some popularity under the stage name "Bruce Bruce". He left Samson in 1981 to join Iron Maiden, replacing Paul Di'Anno, and debuted on their 1982 album The Number of the Beast. During his first tenure in the band, they issued a series of US and UK platinum and gold albums in the 1980s, resulting in Dickinson gaining worldwide fame, and becoming one of the most acclaimed heavy metal vocalists of all time.

Dickinson quit Iron Maiden in 1993, being replaced by Blaze Bayley, in order to pursue his solo career which saw him experiment with a wide variety of heavy metal and rock styles. Dickinson rejoined the band in 1999 along with guitarist Adrian Smith, with whom he released four subsequent studio albums. Since his return to Iron Maiden, Dickinson issued one further solo record in 2005, Tyranny of Souls. He is the older cousin of Rob Dickinson, former lead singer of British alternative rock band Catherine Wheel. His son, Austin, is the lead singer in metalcore band Rise to Remain.

Discuss this Bruce Dickinson biography with the community: