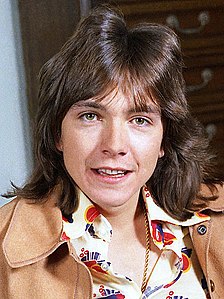 Who is David Cassidy?

David Bruce Cassidy is an American actor, singer, songwriter and guitarist. He is widely known for his role as Keith Partridge in the 1970s musical/sitcom The Partridge Family. He was one of pop culture's celebrated teen idols, he enjoyed a successful pop career in the 1970s, and he still performs as of 2014.

Discuss this David Cassidy biography with the community: