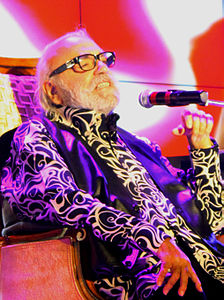 Who is Demis Roussos?

Artemios "Demis" Ventouris Roussos is a Greek singer and performer who had a string of international hit records as a solo performer in the 1970s after having been a member of Aphrodite's Child, a progressive rock group that also included the well renowned Vangelis. He has sold over 60 million albums worldwide.

Roussos was born and raised in Alexandria, Egypt, in a family where both father George and mother Olga were of Greek origin. His parents lost their possessions during the Suez Crisis and consequently decided to move to Greece.

After settling in Greece, Roussos participated in a series of musical groups beginning with The Idols when he was 17, where he met Evangelos Papathanassiou and Loukas Sideras, his future bandmates in Aphrodite's Child. After this he joined We Five, another cover band which had limited success in Greece.

Demis came to a wider audience in 1967 when he joined progressive rock band Aphrodite's Child, with Vangelis and Sideras, initially as a singer but later also playing bass guitar, achieving big commercial success in France and other parts of Europe from 1968 to 1972. They set off for London to break into the international music scene but as a result of bad weather, the plane landed them in Paris - and they decided to stay there signing a record deal with Philips S.A. His distinctive operatic vocal style helped propel the band to international notoriety, notably on their final album 666, which became a progressive rock cult classic.

Discuss this Demis Roussos biography with the community: