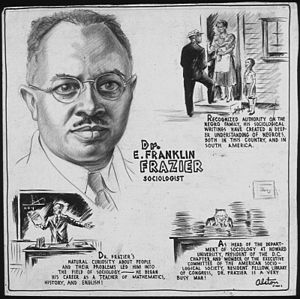 Who was E. Franklin Frazier?

Edward Franklin Frazier, was an American sociologist. His 1932 Ph.D. dissertation The Negro Family in Chicago, later released as a book The Negro Family in the United States in 1939, analyzed the cultural and historical forces that influenced the development of the African-American family from the time of slavery. The book was awarded the 1940 Anisfield-Wolf Book Award for the most significant work in the field of race relations. This book was among the first sociological works on blacks researched and written by a black person. He helped draft the UNESCO statement The Race Question in 1950.

Discuss this E. Franklin Frazier biography with the community: