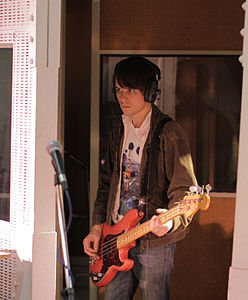 Who is Gary Jarman?

Gary John Jarman is a British multi-instrumentalist, best known for being bassist and singer in the Wakefield music group The Cribs.

The band consists of his twin brother Ryan and his younger brother Ross. Gary is the most political member of The Cribs, and can regularly be heard in interviews railing against inequality and misogyny in the music industry. This could be attributed to the fact that he spent a few years prior to the band's success participating as part of the committee that put on the UK's first "Ladyfest" in London, and also numerous fundraisers around this time.

He has also been seen with various other bands, such as Quasi in which his wife Joanna Bolme plays bass, Comet Gain, and Jeffrey Lewis - guesting as a drummer all times. In 2008 he recorded vocals for a track called "I Would Like to be Forgiven" by fellow Wakefield band The Research and appeared in the music video for Stephen Malkmus and The Jicks' song Gardenia.

In 2009, on very short notice, he played bass with Franz Ferdinand during two of their shows supporting Green Day when bassist Bob Hardy forgot about a wedding he had been invited to.

Discuss this Gary Jarman biography with the community: