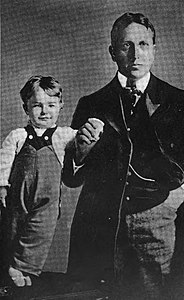 Who was George Randolph Hearst?

Though he never held a title higher than Vice-President at the Hearst Corporation, he was listed above many with higher-sounding titles when executives were listed in the company's publications. One of the five family trustees of the trust established under his father's will, he was able to secure a seat on the corporation's board for his son, George Randolph Hearst, Jr., in the 1950s. After Hearst Sr.'s death in 1972, his son succeeded him as a trustee and was chairman of the corporation's board from 1996 until his death in 2012.

Discuss this George Randolph Hearst biography with the community: